Here's a thing, in the world that I live in (and I think this is the same for 95% of the worlds population) if I see a sign that reads 'Warning! Bridge out ahead', probably accompanied by a pictorial representation of a little black car driving off the end of a solid black bridge painted inside a red bordered triangular sign standing erect on the roadside, I would consider my route very carefully. It seems reasonable to me to believe that to continue driving on said road will result in trauma, or possibly death. Should I be surprised if, ignoring the warning signs, I end up sat behind the steering wheel of my little car as it sails through the air into a ravine, deep gully or onto the freeway underneath? And who's fault is it?

Russian Redemption, my first book, carries a number of warnings:

"An Adults ONLY story that contains some graphic and shocking violence coupled with intrigue and conspiracy, it is a portrayal of life and death in war-torn Russia, the depths of depravity a human can sink to, and the cruel mind games played by those in power. It is also a look inside the Kremlin and the NKVD in the time of Stalin, and into life in a USSR the early "Russian revolutionaries" would never have imagined."

Described by the Wishing Shelf Awards as "A dark, horror-filled look at Russia in 1941. Powerfully written and fascinating."

Some of the reviews highlight the nature of the content as well:

"A Novel of Brutality and Cruelty"

All of this and yet still the Sunday School teacher type choose to read it and are shocked to the point of being "so disgusted I couldn't read another word...". I'm not surprised! Why the bloody hell would you choose to read a story that is clearly beyond the moral tolerance of someone that believes the sky is blue and the clouds are made out of candy floss?! People that live in a bubble where the sun always shines, flowers bloom and the dark side of humanity is denied an existence.

I don't want you people reading "Russian Redemption" - I don't want to be responsible for introducing you to the reality of war; the violence and the violations of the horrible side of sub human existence. And I sure as heck don't want you bleating about how shocked and mentally scarred the story has left you - It's supposed to!!!

What's prompted this reaction? I got an email this morning in response to a review request submitted to a 'Review website' on 22nd August 2013 - just one line, 'Sorry.... 2 people tried to read it but couldn't so there is no review for you..' type email. It took nearly 2 years for that!

I don't really worry about reviews too much - I know that positive reviews can certainly help sales,of course they can, but I also know that the Amazon review process is so flawed it's pretty pointless to a degree. And, of course, a review is very subjective, very personal. But seriously folks, if you don't like blood, gore, perversion, rape, intrigue, violence or people dying PLEASE DO NOT READ 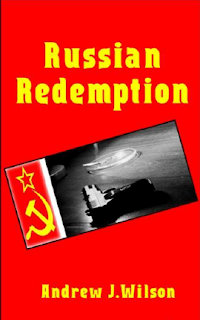